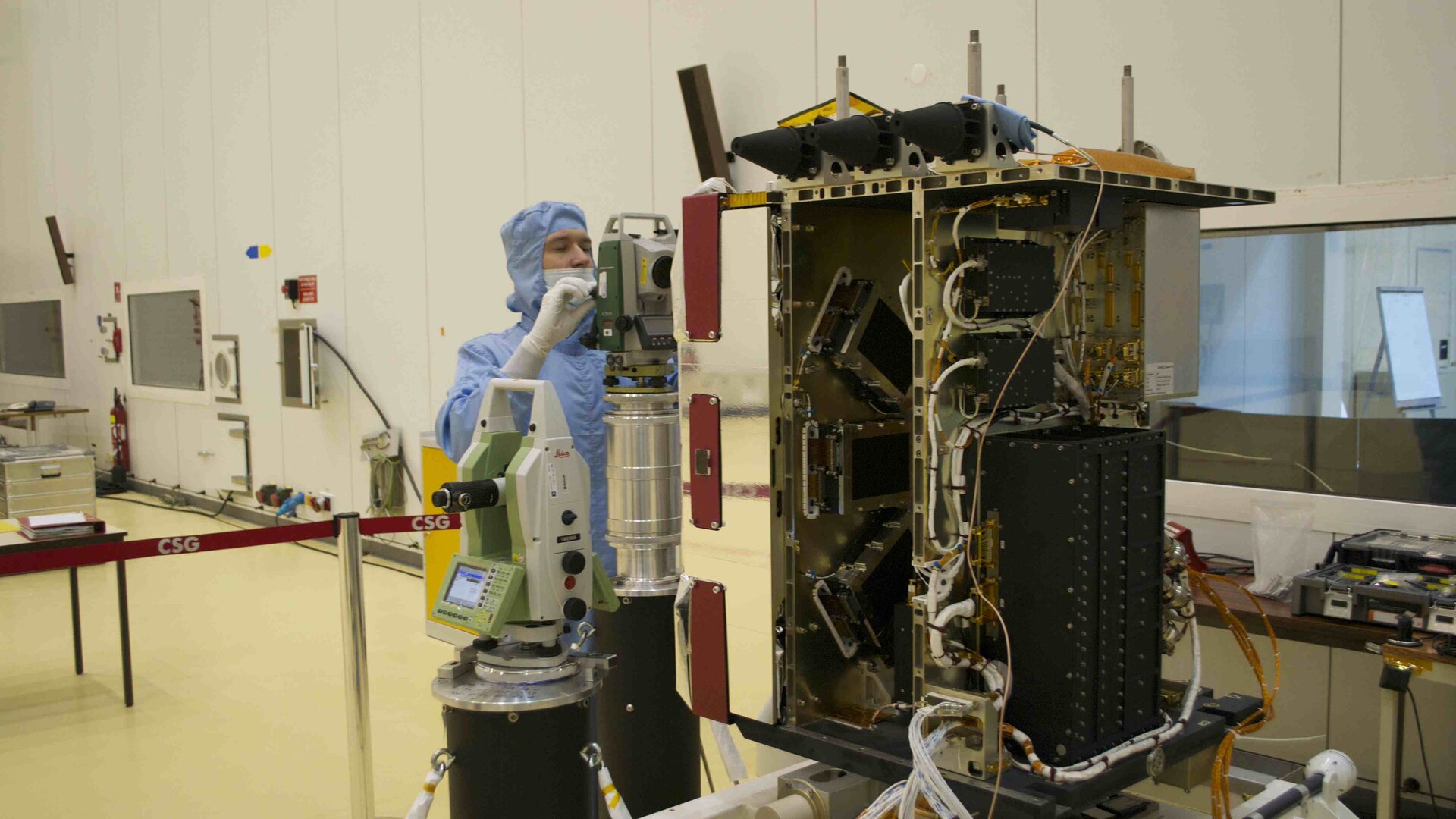 At the same time that Proba-V’s electrical ground support equipment (EGSE) and control computer were being installed, the OIP Sensor Systems team finalised the optical alignment setup for testing the Vegetation instrument.

The flight battery was installed on the satellite. Having been fully discharged for transport, it was now fully charged without any problems. Once the charged battery is in place, the satellite itself can be turned on and booted. In support of alignment testing, images were acquired with the Vegetation instrument. The testing was completed ahead of schedule, demonstrating that Vegetation has not deteriorated during its trip from Europe.

The latest version of the flight software was also uploaded to Proba-V’s onboard computer today. The functional test of the satellite was started, continuing into the following day. Both primary and redundant computers were operated.

The EPCU (Ensemble Preparation Charge Utile) payload preparation building was closed for the day at 19:00.

The normal workday began with daily meetings and the opening of the EPCU. Today was mainly dedicated to checking out all functions of the satellite. A specific check of Vegetation camera behaviour was performed, measuring dark and illuminated images.

Following the success of the alignment check and functional tests of the Vegetation instrument, the multi-layer insulation (MLI) around it has been closed for the final time.

No anomalies were encountered during the functional check and the EPCU was closed around 19:00.

A normal start to the day with the EPCU opening around 08:45.

With Vegetation testing complete, the OIP team packed the theodolite equipment needed for shipment back to Europe.

This day was mostly dedicated to team safety training, in order to allow them to work on the gantry of the mobile launch tower in the presence of the Vega launcher. The spectacular part of this training was a jump from second-storey scaffolding down into a security sock. The whole team passed – though some members asked to try again! A full visit to the launch tower was then conducted. The team had the chance to view each stage of the Vega launcher on the launch pad, up to the AVUM fourth stage.

Following the safety training, the team returned to the EPCU to prepare for the first fit check of the interface with the separation system. The fit check was successfully performed with the support of the European Launch Vehicle (ELV) company team and the satellite was then repositioned on its stand.

The EPCU was opened at 09:00 after our ‘ritual’ daily meetings.

In parallel, the solar panels that were removed from the satellite upon arrival at Kourou were electrically tested. The collected information was transmitted to specialists at ESTEC to carry out a full analysis. The results are anticipated for the middle of next week, after which the solar panels will be re-integrated.

The satellite was also prepared for the reintegration of the ADS-B technology payload. Developed by the Germany’s DLR space agency and provided on an in-kind basis, the goal is to demonstrate air traffic monitoring from space. An anomaly was detected during the functional test in Europe during system testing.

The day concluded around 18:30 with the closure of the EPCU.

No daily meeting with Arianespace today and the EPCU was opened around 09:15.

Today was dedicated to the reinstallation of ADS-B into the satellite and its full functional test. The DLR team arrived on site around 10:00 and after receiving their security badges were allowed to enter the EPCU.

The ADS-B tests were conducted and the payload was declared good for flight.

The day ended around 18:30 with the closure of the EPCU.

Some team members, not involved with the ADS-B testing, were able to organise a trip down to the border with Suriname that afternoon, where they witnessed the amazing egg laying of the Leatherback sea turtle by night.

A day off! The entire team went for a visit to the famous ‘Ils du Salut’ off Kourou, which served as a penal colony for French prisoners in the 19th and early 20th centuries.

The second week of the launch campaign began early with the opening of the EPCU at 08:00, followed by the daily meeting.

In the integration hall the day was dedicated to continuing the software testing, including ADS-B validation.

At the end of the day electrical connectivity between Proba-V and the separation system was achieved.

Early in the day, around 07:00, the satellite was readied to run simulations of orbital data acquisition from the Vegetation instrument. Lasting the whole day, this simulation included the camera’s control centre – known as its User Segment. The acquired data were sent to the User Segment to validate the full chain of data acquisition. This test had already been performed in Europe, but was repeated here in Kourou to gain full confidence in the correct behaviour of all elements involved in the Proba-V mission.

The day ended at 19:30 with the final closure of the integration hall.

Preparation for the launch took place today with testing on the pad of the electrical connectivity between the launcher and the Proba-V access point for the satellite battery charger. Proba-V’s test team was deployed both on top of the mobile gantry and at its base to verify the correct installation of the harness from the top of the Vega launcher to the bunker where activities to babysit the satellite will take place once it is installed in the launcher fairing.

In parallel, software testing continued in the EPCU.