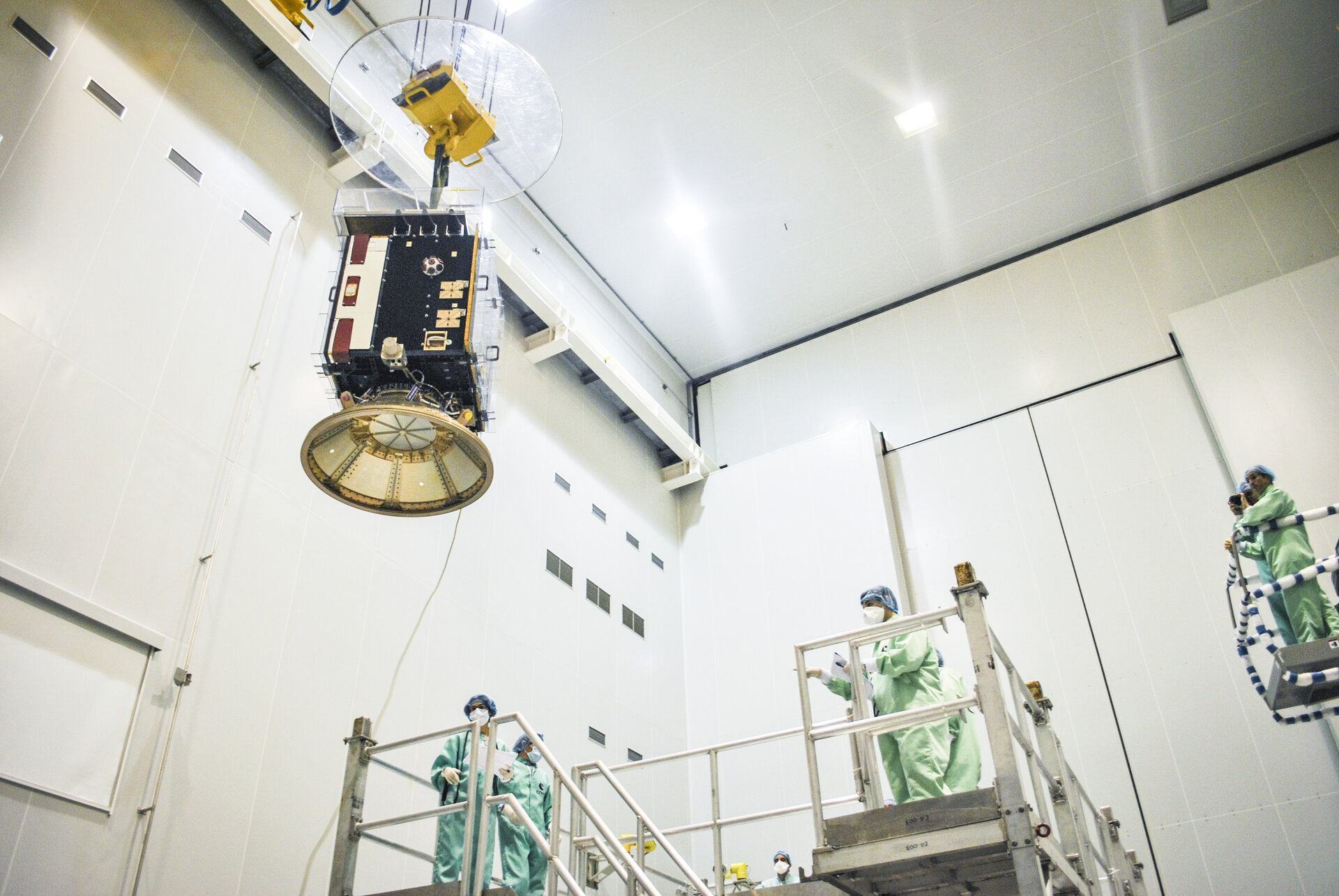 Part of the QinetiQ team returned to Kourou to restart the activities of this important week, which is scheduled to end with the integration of the fairing on the Vega launcher.

The day started early at 06:00, with the finalisation of the last connection with the Small Satellite Interface System, SSIS, and the installation of the hoisting device being used to lift Proba-V.

Around 09:00 the operation to lift Proba-V and the SSIS onto the Vega Secondary Payload Adapter (Vespa) began. It was completed around lunchtime with the securing of the band between the two elements.

In parallel, the fairing was transferred to the airlock of the S5 integration hall for cleaning and final preparation before encapsulation. At the end of the day, Proba-V was safely resting on top of Vespa.

For Proba-V, today was a light day in preparation for encapsulation within the launcher fairing on Wednesday. Only battery monitoring was performed, while logos were applied to be fairing, including the large Proba-V logo.

The fairing was pushed from the airlock into the S5A integration hall. The entry of the 10 m-tall halves of the fairing made for a spectacular sight.

This busy day for the integration teams started at 06:30 with the removal of Proba-V’s perspex solar panel and the covers on the Vegetation instrument optics. These covers were removed at the last moment before the twin halves of the fairings were sealed around the complete Vespa assembly and Proba-V on top.

Following the closure, the Proba-V battery was checked once more. The necessary electrical checkout equipment was then transferred under the launch pad in preparation for the fairing’s arrival at the pad tomorrow.

From here on, Proba-V will stay enclosed in its protective cocoon until Vega lifts off. Today therefore marked the last day that Proba-V was visible to the team.

This day was dedicated to finalising the closure of the fairing on Vespa and its payloads, in preparation for its transport to the launch pad during the night.

Transport by night is mandatory to ensure acceptable thermal conditions during the planned two-hour transfer.

The complete fairing when ready was placed on a truck trailer.

The final operation before the start of transportation was the pressurisation of the fairing with pure nitrogen to preserve a clean environment while it remains outside.

A pressurisation test was performed but the leak rate was higher than expected. It was then decided to scrub the transport to the launch pad today and increase the leak-tightness of the fairing on Friday.

The engineers of ELV, CASA and Arianespace worked to resolve the leak issue discovered yesterday during the nitrogen pressure test of the fairing composite, rendering the fairing sufficiently airtight that yesterday’s fairing conditioning could resume.

Owing to the propellant filling of the ATV-4 spacecraft in the adjacent integration hall, CSG safety regulations put limitations on the upper composite’s transportation today.

Thanks to the helpful collaboration with the ATV project, a possible window at 21:00 was identified during a pause in the filling activities.

The complete convoy was ready to start at 21:00 and the team received the authorisation from safety personnel to start the trip.

The convoy, escorted by the Gendarmerie, drove to the launch pad located 10 km away and took about two and a half hours, reaching its final destination around 23:30.

The fairing was carefully carried to the Vega launch tower on the trailer, at which point the hoisting activities started.

About two hours later, under heavy tropical rain, the fairing arrived on the upper platform of the tower, positioned next to the upper stage of the Vega rocket.

The umbilical was connected to Proba-V in order to check the health of the battery. All was reported nominal. This long day ended at 02:30 the next morning.