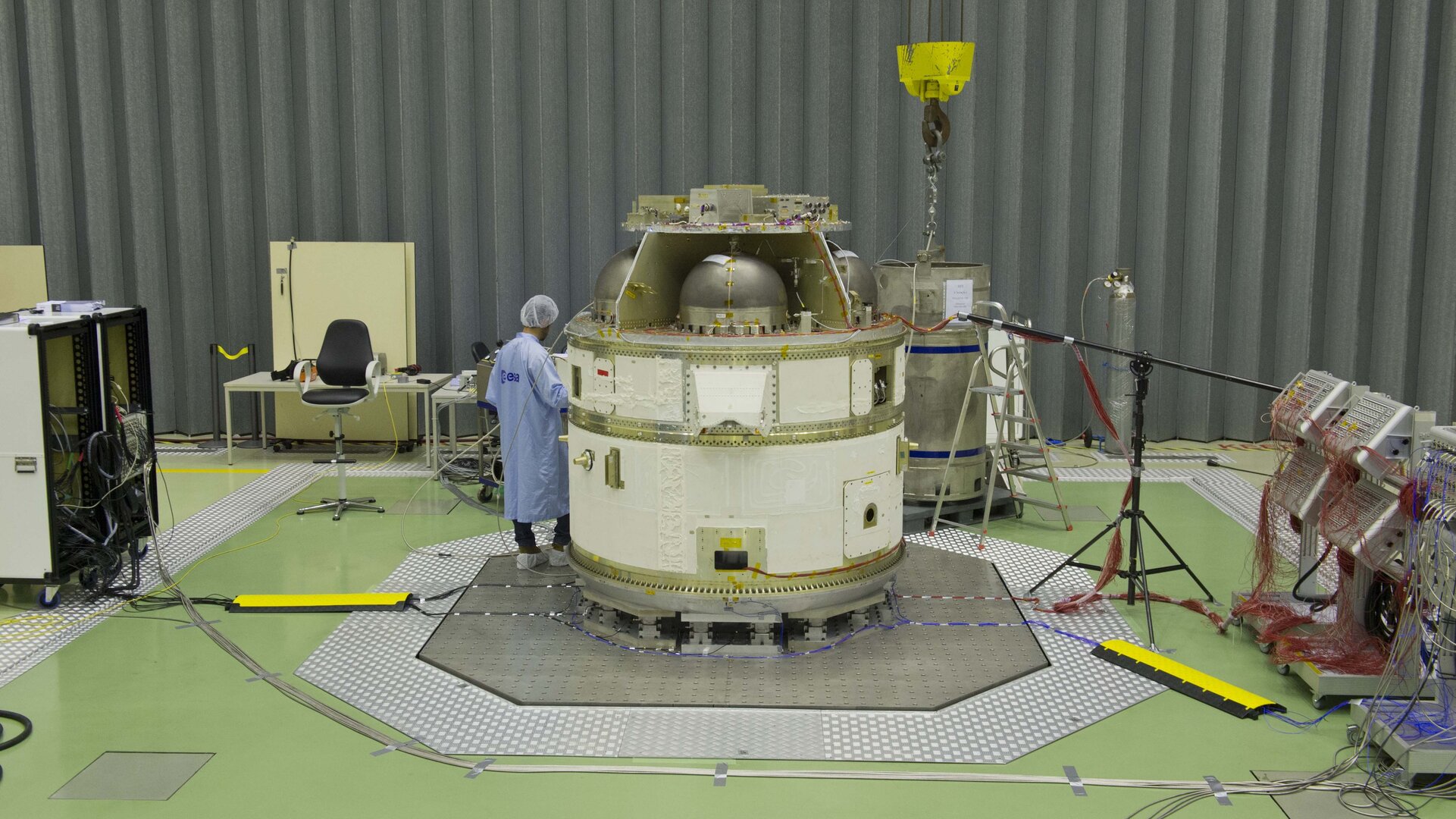 Vega’s top stage has been subjected to the forces of launch on a shaker table at ESA’s main technical centre. This testing is intended to boost the carrying capacity of Europe’s newest launcher for future flights.

“We are validating that this stage can still fly safely when partially versus fully loaded with propellant,” explains Michel Bonnet of ESA’s Vega team, overseeing the campaign.

“We need to be sure the partially-loaded stage can withstand the maximum anticipated flight vibration without any detrimental amplification effects.

“For each kilo of propellant that we can take off we would then have the potential to add another kilo to the payload, on close to a one-to-one basis, down to 80% of the original propellant volume.”

The 30 m-high four-stage Vega is Europe’s launcher for smaller satellites.

Flown for the first time in February 2012 and then again in May 2013, Vega can accommodate between 300 kg and 2.5 tonnes of payload depending on the orbit and altitude demanded – the launcher being benchmarked to haul 1.5 tonnes to a 700 km-altitude polar orbit.

As much as a spacecraft in its own right as an upper stage, AVUM plays a dual role in Vega flights. Hosting Vega’s avionics ‘brain’, it oversees the overall flight of the launcher.

Then, when it separates from the third stage, AVUM flies beyond the atmosphere to deploy its various payloads into their set orbits, achieving metre-scale precision. Requirements related to Vega’s previous solid rocket third stage – which must be disposed of far from inhabited areas, usually in the Arctic Sea – often means AVUM‘s solo flight begins with a non-optimised trajectory, which it needs to compensate for.

Uniquely for a European upper stage, AVUM can reignite up to five times during the course of its solo flight, its final engine firing serving to deorbit itself to burn up in the atmosphere – to avoid adding to the problem of orbital debris.

“But it doesn’t necessarily need all of that propellant for every mission.

“So if we don’t load 20% of the propellants, we could gain on the order of another 100kg of payload, quite a significant figure.”

The most straightforward way of qualifying the partially loaded AVUM for flight turned out to be filling it with simulated propellant and place it on the QUAD shaker at ESA’s ESTEC Test Centre, in Noordwijk, the Netherlands, Europe’s largest space simulation facility, to reproduce the dynamic environment of launch.

“In general, this works very well, but these bladders – just like water balloons – might be vulnerable to excessive vibration.”

AVUM’s highly reactive bipropellants being judged as far too hazardous for test use, simulated propellant was used in their place, possessing equivalent density and behaviour.

“In the past Freon would have been employed, but this is now off-limits due to its ozone-destroying nature,” explains Tommaso Ghidini of ESA’s Materials and Processes section.

“Instead, we worked to qualify an ozone-friendly substitute, hydrofluoroether (HFE 7100) – more typically used as an industrial cleaning agent and refrigerant. We tested it was chemically compatible both with Teflon and the kind of titanium alloys such tanks are made from.”

Vega prime contractor, ELV, and its fourth stage developer, Avio, also participated in the vibration testing, which were performed for ESA by European Test Services.

In the next two years, new tanks with a larger volume are being developed as part of the Vega Evolution programme, seeking to extend the launcher’s future performance envelope, as well as bringing this bladder technology to Western Europe – the current Vega tanks being procured in Russia.