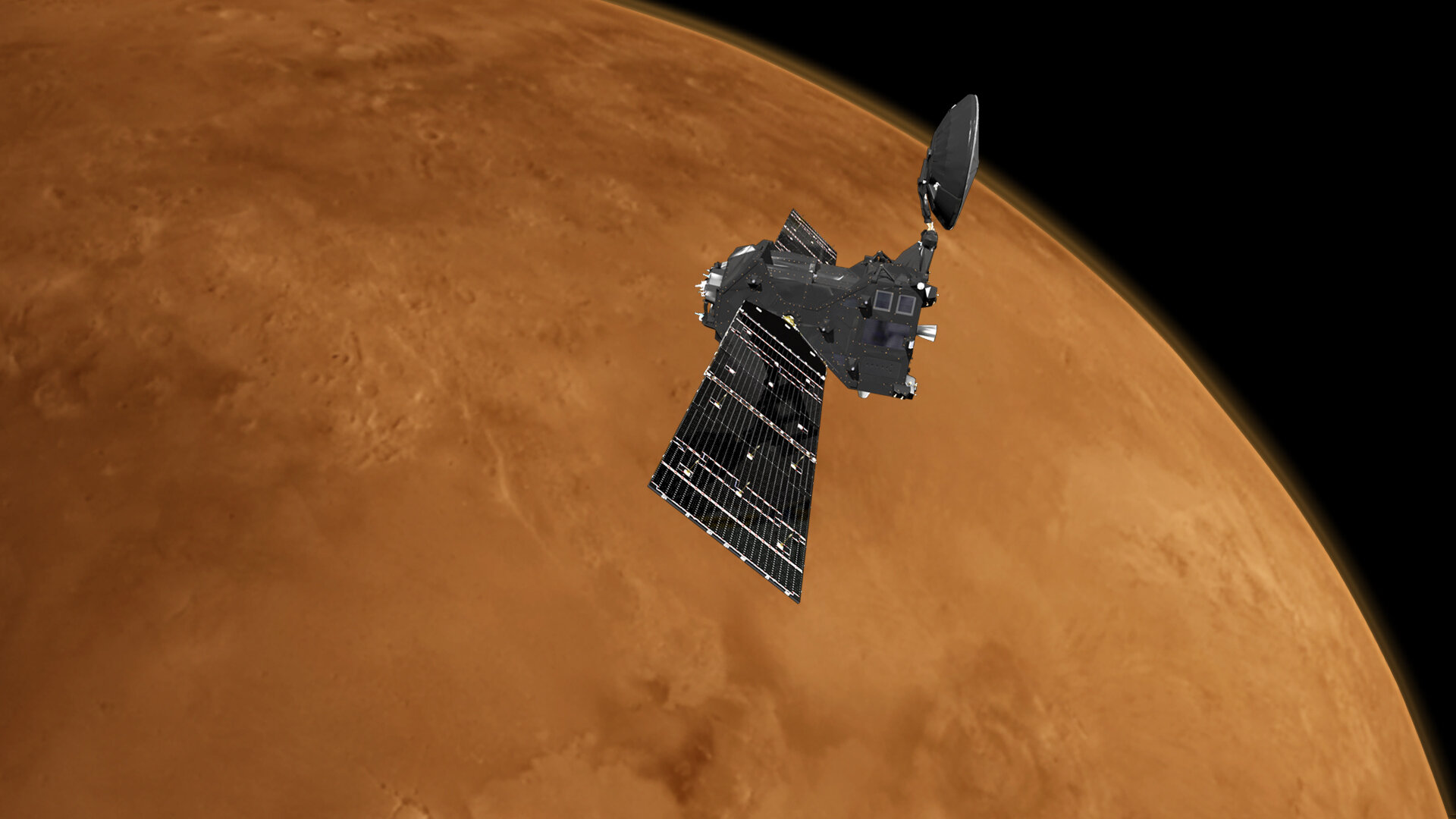 ESA’s ExoMars Trace Gas Orbiter has spotted new gas signatures at Mars. These unlock new secrets about the martian atmosphere, and will enable a more accurate determination of whether there is methane, a gas associated with biological or geological activity, at the planet.

The Trace Gas Orbiter (TGO) has been studying the Red Planet from orbit for over two years. The mission aims to understand the mixture of gases that make up the martian atmosphere, with a special focus on the mystery surrounding the presence of methane there.

Meanwhile, the spacecraft has now spotted never-before-seen signatures of ozone (O3) and carbon dioxide (CO2), based on a full martian year of observations by its sensitive Atmospheric Chemistry Suite (ACS). The findings are reported in two new papers published in Astronomy & Astrophysics, one led by Kevin Olsen of the University of Oxford, UK and another led by Alexander Trokhimovskiy of the Space Research Institute of the Russian Academy of Sciences in Moscow, Russia.

“These features are both puzzling and surprising,” says Kevin.

“They lie over the exact wavelength range where we expected to see the strongest signs of methane. Before this discovery, the CO2 feature was completely unknown, and this is the first time ozone on Mars has been identified in this part of the infrared wavelength range.”

The martian atmosphere is dominated by CO2, which scientists observe to gauge temperatures, track seasons, explore air circulation, and more. Ozone – which forms a layer in the upper atmosphere on both Mars and Earth – helps to keep atmospheric chemistry stable. Both CO2 and ozone have been seen at Mars by spacecraft such as ESA’s Mars Express, but the exquisite sensitivity of the ACS instrument on TGO was able to reveal new details about how these gases interact with light.

Observing ozone in the range where TGO hunts for methane is a wholly unanticipated result.

Scientists have mapped how martian ozone varies with altitude before. So far, however, this has largely taken place via methods that rely upon the gas' signatures in the ultraviolet, a technique which only allows measurement at high altitudes (over 20 km above the surface).

The new ACS results show that it is possible to map martian ozone also in the infrared, so its behaviour can be probed at lower altitudes to build a more detailed view of ozone’s role in the planet’s climate.

One of the key objectives of TGO is to explore methane. To date, signs of martian methane – tentatively spied by missions including ESA’s Mars Express from orbit and NASA’s Curiosity rover on the surface – are variable and somewhat enigmatic.

While also generated by geological processes, most of the methane on Earth is produced by life, from bacteria to livestock and human activity. Detecting methane on other planets is therefore hugely exciting. This is especially true given that the gas is known to break down in around 400 years, meaning that any methane present must have been produced or released in the relatively recent past.

“Discovering an unforeseen CO2 signature where we hunt for methane is significant,” says Alexander Trokhimovskiy. “This signature could not be accounted for before, and may therefore have played a role in detections of small amounts of methane at Mars.”

The observations analysed by Alexander, Kevin and colleagues were mostly performed at different times to those supporting detections of martian methane. Besides, the TGO data cannot account for large plumes of methane, only smaller amounts – and so, currently, there is no direct disagreement between missions.

“In fact, we’re actively working on coordinating measurements with other missions,” clarifies Kevin. “Rather than disputing any previous claims, this finding is a motivator for all teams to look closer – the more we know, the more deeply and accurately we can explore Mars’ atmosphere.”

Realising the potential of ExoMars

Methane aside, the findings highlight just how much we will learn about Mars as a result of the ExoMars programme.

“These findings enable us to build a fuller understanding of our planetary neighbour,” adds Alexander.

“Ozone and CO2 are important in Mars’ atmosphere. By not accounting for these gases properly, we run the risk of mischaracterising the phenomena or properties we see.”

Additionally, the surprising discovery of the new CO2 band at Mars, never before observed in the laboratory, provides exciting insight for those studying how molecules interact both with one another and with light – and searching for the unique chemical fingerprints of these interactions in space.

“Together, these two studies take a significant step towards revealing the true characteristics of Mars: towards a new level of accuracy and understanding,” says Alexander.

Successful collaboration in the hunt for life

As its name suggests, the TGO aims to characterise any trace gases in Mars’ atmosphere that could arise from active geological or biological processes on the planet, and identify their origin.

The ExoMars programme consists of two missions: TGO, which was launched in 2016 and will be joined by the Rosalind Franklin rover and the Kazachok landing platform, due to lift off in 2022. These will take instruments complementary to ACS to the martian surface, examining the planet’s atmosphere from a different perspective, and share the core objective of the ExoMars programme: to search for signs of past or present life on the Red Planet.

“These findings are the direct result of hugely successful and ongoing collaboration between European and Russian scientists as part of ExoMars,” says ESA TGO Project Scientist Håkan Svedhem.

“They set new standards for future spectral observations, and will help us to paint a more complete picture of Mars’ atmospheric properties – including where and when there may be methane to be found, which remains a key question in Mars exploration.”

“Additionally, these findings will prompt a thorough analysis of all the relevant data we’ve collected to date – and the prospect of new discovery in this way is, as always, very exciting. Each piece of information revealed by the ExoMars Trace Gas Orbiter marks progress towards a more accurate understanding of Mars, and puts us one step closer to unravelling the planet’s lingering mysteries.”

“First detection of ozone in the mid-infrared at Mars: implications for methane detection” by K. S. Olsen et al. (2020) and “First observation of the magnetic dipole CO2 absorption band at 3.3 μm in the atmosphere of Mars by the ExoMars Trace Gas Orbiter ACS instrument” by A. Trokhimovskiy et al. (2020) are published in Astronomy & Astrophysics.

The studies utilised the Mid-InfraRed (MIR) channel of the Atmospheric Chemistry Suite (ACS) on the ExoMars Trace Gas Orbiter (TGO), reporting the first observation of the 3000–3060 cm-1 ozone (O3) band and the discovery of the 3300 cm-1 16O12C16O magnetic dipole band (which both overlap with the 2900–3300cm-1 methane ν3 absorption band) at Mars.

ExoMars is a joint endeavour of the European Space Agency and Roscosmos.