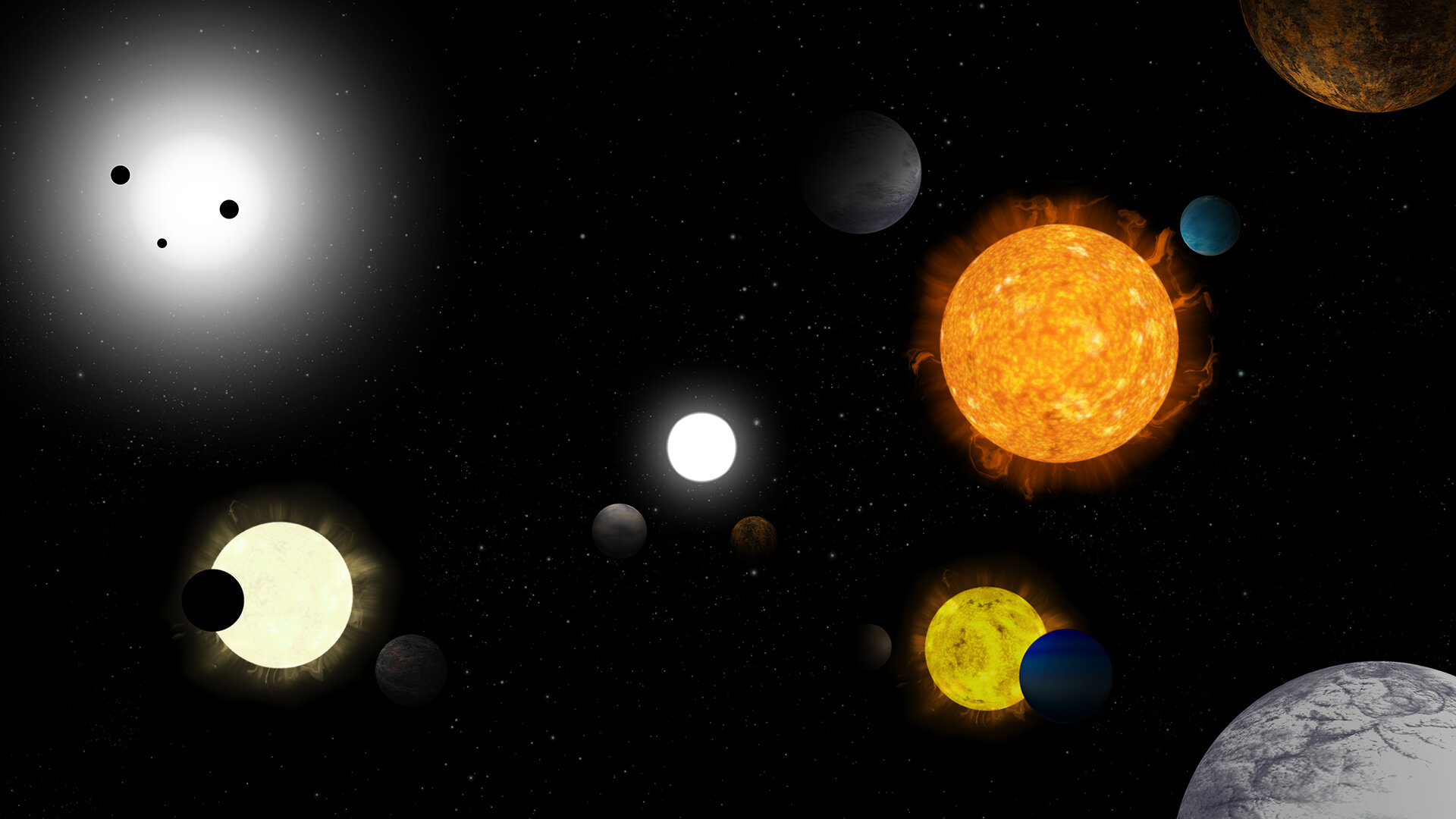 Humans have long speculated on the existence of other worlds, with the idea first mooted by the Ancient Greek philosophers and recurring through the Middle Ages and Renaissance. Searches for exoplanets began in earnest in the mid-20th Century. The first unambiguous discovery of an exoplanet orbiting a star like our Sun, in 1995, completely changed our perspective on the Solar System. A giant planet with a mass of around half that of Jupiter, subsequently named 51 Pegasi b, was found orbiting its host star in just over four days. The presence of such a massive planet in such a short orbit – much closer to its star than Mercury is to our Sun – was completely unexpected and did not fit with our then understanding of planet formation.

Radial velocity
51 Pegasi b was found using a ground-based observatory by spotting ‘wobbles’ in its star’s motion. Such wobbles are caused by the gravitational pull of a planet as the planet and star orbit around a common centre of mass. When viewed from afar, the star appears to move towards and away from the observer. This motion makes the light from the star appear slightly bluer when it is moving towards the observer, and slightly redder when moving away. This shift in frequency is known as the Doppler effect, the same effect as the change in pitch of an ambulance siren as it rushes past you. Most early exoplanet discoveries were made using this so-called radial velocity method.

Transits
The first detections using transit photometry were made in 1999. ‘Transiting’ exoplanets are detected as they pass in front of – transit – their host star, causing a dip in the starlight as seen from the observer’s viewpoint. The transit repeats, with the time interval depending on the time it takes the exoplanet to orbit its star. For example, an observer of our own Solar System would have to wait a year to see a repeat of Earth transiting the Sun.

Direct imaging
The vast majority of confirmed exoplanets have been discovered using the two methods above. A less common method is direct imaging, which relies on measuring light from the exoplanet itself. This is particularly challenging at optical wavelengths, because the relatively dim planet can be lost in the glare of the much brighter host star. However, instruments have been developed that block the light from the star, and more than 40 planets have been detected in this way.

Microlensing
Microlensing relies on the chance alignment of two stars with an observer. As one star crosses behind the other, the closer star acts like a lens, bending the light so that the brightness smoothly increases and decreases. If a planet is present around the closer star, its gravity will also bend the light stream, causing a spike. Over 70 planets have been detected by this method, but detections are unrepeatable.

A few planets have also been found using other techniques, including pulsar timing. By combining the results of observations and surveys using different techniques, we are able to build a representative picture of the diversity of exoplanets and planetary systems.

What really opened the floodgates for the discovery of exoplanets was the use of space-based telescopes. In addition to being free of the disturbances caused by viewing through Earth’s atmosphere, satellites offer a more continuous line-of- sight visibility to the target star and round-the-clock observations.

One of the first exoplanet-sensitive space telescopes was the CNES-led Convection, Rotation and planetary Transits mission, CoRoT (2006–13). The mission’s two objectives were to search for extrasolar planets with short orbital periods (of days or even hours), and to measure oscillations in stars. Using the transit method, CoRoT has uncovered 37 exoplanets to date, including the first confirmed rocky planet (though it was orbiting much too close to its star to be habitable!). More may be discovered during the post-mission data analysis.

NASA’s 2009 Kepler mission was an exoplanet discovery machine, accounting for almost three-quarters of all exoplanet discoveries to date. It looked at a fixed patch of sky for over four years, monitoring over 150 000 faint stars and discovering thousands of exoplanets. Although it only looked at a small area of the sky, the slew of discoveries gave an indication of the vast number of exoplanets that must exist in our Galaxy.

The most recent addition to the exoplanet-hunting fleet is NASA’s Transiting Exoplanet Survey Satellite, Tess, launched in April 2018. It is an all-sky mission with the main goal of detecting small planets with bright host stars.

While not dedicated planet-hunters, space observatories with completely different mission goals have also contributed to exoplanet studies. For example, the NASA/ESA Hubble Space Telescope, which was designed and launched well before exoplanets were known to be commonplace, can be used to make transit measurements and can even discern some details of the atmospheres of planets. Similarly, NASA’s infrared space telescope Spitzer has contributed, studying changes in infrared light during an exoplanet’s transit.

ESA’s Gaia mission, through its unprecedented all-sky survey of the position, brightness and motion of over one billion stars, is generating a large astrometry databank from which exoplanets will be found, either through observed changes in a star’s position on the sky due to planets orbiting around it, or by a dip in its brightness as a planet transits its face.

Discovering an exoplanet is just the beginning. Dedicated space telescopes are needed to follow up on the ever-growing catalogue and to start characterising these intriguing worlds in order to understand their place in the Universe. To this end, ESA plans to launch three dedicated exoplanet satellites in the next decade, each tackling a unique aspect of exoplanet science: Cheops, Plato and Ariel.