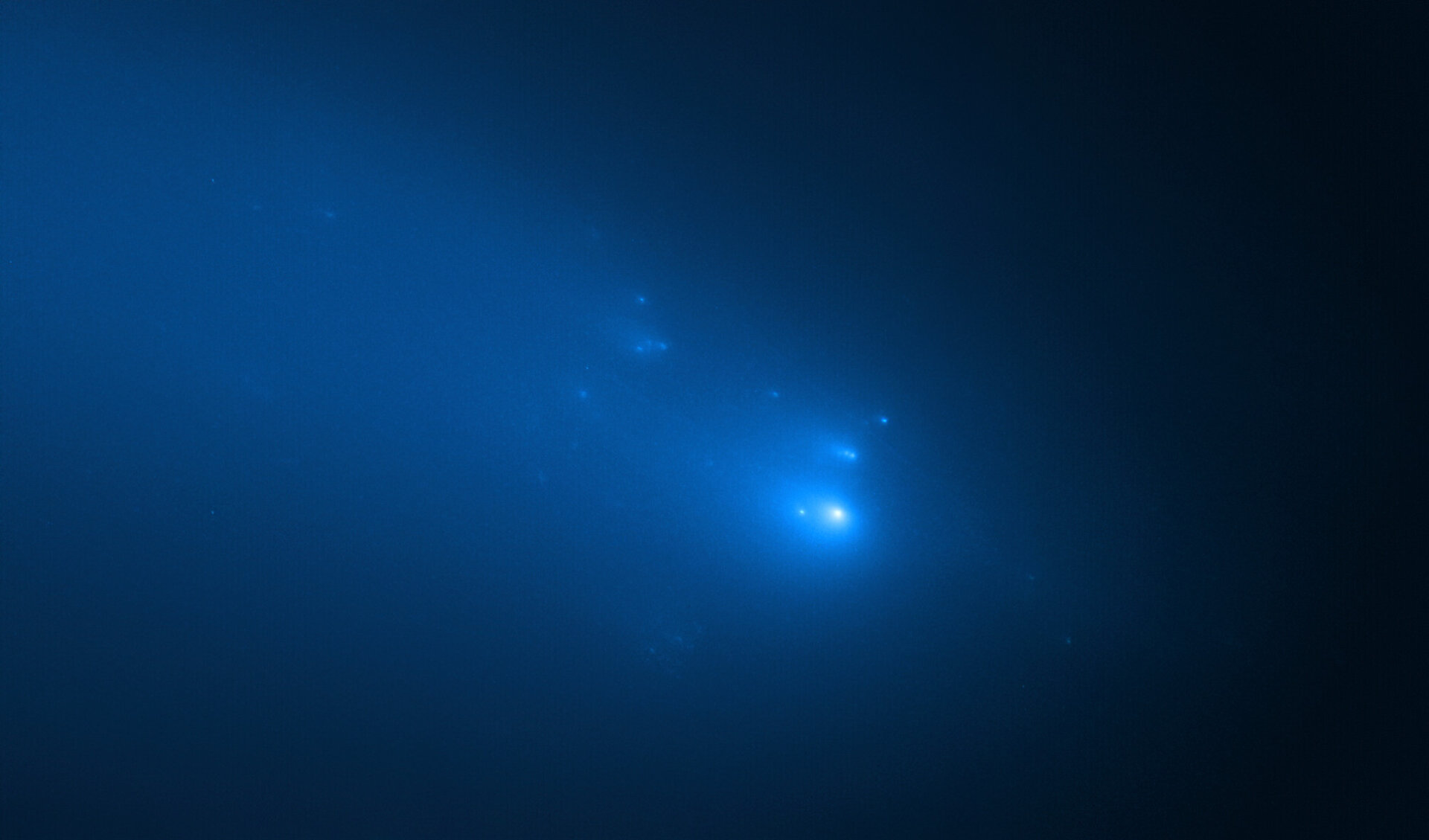 ESA’s Solar Orbiter will cross through the tails of Comet ATLAS during the next few days. Although the recently launched spacecraft was not due to be taking science data at this time, mission experts have worked to ensure that the four most relevant instruments will be switched on during the unique encounter.

Solar Orbiter was launched on 10 February 2020. Since then, and with the exception of a brief shutdown due to the coronavirus pandemic, scientists and engineers have been conducting a series of tests and set-up routines known as commissioning.

The completion date for this phase was set at 15 June, so that the spacecraft could be fully functional for its first close pass of the Sun, or perihelion, in mid-June. However, the discovery of the chance encounter with the comet made things more urgent.

Serendipitously flying through a comet’s tail is a rare event for a space mission, something scientists know to have happened only six times before for missions that were not specifically chasing comets. All such encounters have been discovered in the spacecraft data after the event. Solar Orbiter’s upcoming crossing is the first to be predicted in advance.

It was noticed by Geraint Jones of the UCL Mullard Space Science Laboratory, UK, who has a 20-year history of investigating such encounters. He discovered the first accidental tail crossing in 2000, while investigating a strange disturbance in data recorded by the ESA/NASA Ulysses Sun-studying spacecraft in 1996. This study revealed that the spacecraft had passed through the tail of Comet Hyakutake, also known as ‘The Great Comet of 1996’. Soon after the announcement, Ulysses crossed the tail of another comet, and then a third one in 2007.

Earlier this month, realising that Solar Orbiter was going to be 44 million kilometres downstream of Comet C/2019 Y4 (ATLAS) in just a matter of weeks, Geraint immediately alerted the ESA team.

Solar Orbiter is equipped with a suite of 10 in-situ and remote-sensing instruments to investigate the Sun and the flow of charged particles it releases into space – the solar wind. Fortuitously, the four in-situ instruments are also perfect for detecting the comet’s tails because they measure the conditions around the spacecraft, and so they could return data about the dust grains and the electrically charged particles given off by the comet. These emissions create the comet’s two tails: the dust tail that is left behind in the comet’s orbit and the ion tail that points straight away from the Sun.

Solar Orbiter will cross the ion tail of Comet ATLAS on 31 May–1 June, and the dust tail on 6 June. If the ion tail is dense enough, Solar Orbiter’s magnetometer (MAG) might detect the variation of the interplanetary magnetic field because of its interaction with ions in the comet’s tail, while the Solar Wind Analyser (SWA) could directly capture some of the tail particles.

When Solar Orbiter crosses the dust tail, depending on its density – which is extremely difficult to predict – it is possible that one or more tiny dust grains may hit the spacecraft at speeds of tens of kilometres per second. While there is no significant risk to the spacecraft from this, the dust grains themselves will be vaporised on impact, forming tiny clouds of electrically charged gas, or plasma, which could be detected by the Radio and Plasma Waves (RPW) instrument.

“An unexpected encounter like this provides a mission with unique opportunities and challenges, but that’s good! Chances like this are all part of the adventure of science,” says Günther Hasinger, ESA Director of Science.

“With these caveats, we are ready for whatever Comet ATLAS has to tell us,” says Daniel Müller, ESA Project Scientist for Solar Orbiter.

Another challenge entails the comet’s behaviour. Comet ATLAS was discovered on 28 December 2019. During the next few months, it brightened so much that astronomers wondered whether it would become visible to the naked eye in May.

Unfortunately, in early April the comet fragmented. As a result, its brightness dropped significantly too, robbing sky watchers of the view. A further fragmentation in mid-May has diminished the comet even more, making it less likely to be detectable by Solar Orbiter.

Although the chances of detection have reduced, the effort is still worth making according to Geraint.

“With each encounter with a comet, we learn more about these intriguing objects. If Solar Orbiter detects Comet ATLAS's presence, then we'll learn more about how comets interact with the solar wind, and we can check, for example, whether our expectations of dust tail behaviour agree with our models,” he explains. “All missions that encounter comets provide pieces of the jigsaw puzzle.”

Geraint is the principal investigator of ESA’s future Comet Interceptor mission, which consists of three spacecraft and is scheduled for launch in 2028. It will make a much closer flyby of an as yet unknown comet that will be selected from the newly discovered comets nearer the time of launch (or even after that).

“This tail crossing is also exciting because it will happen for the first time at such close distances from the Sun, with the comet nucleus being inside the orbit of Mercury,” says Yannis Zouganelis, ESA Deputy Project Scientist for Solar Orbiter.

Understanding the dust environment in the innermost region of the Solar System is one of Solar Orbiter’s scientific objectives.

“Near-Sun comets like Comet ATLAS are sources of dust in the inner heliosphere and so this study will not only help us understand the comet, but also the dust environment of our star,” adds Yannis.

Looking at an icy object rather than the scorching Sun is certainly an exciting – and unexpected – way for Solar Orbiter to start its scientific mission, but that’s the nature of science.

“Scientific discovery is built on good planning and serendipity. In the three months since launch, the Solar Orbiter team has already proved that it’s ready for both,” says Daniel.

‘Prospects for the In Situ detection of Comet C/2019 Y4 ATLAS by Solar Orbiter’ by G. Jones et al (2020) is published in the Research Notes of the AAS.

Solar Orbiter is an ESA-led mission with strong NASA participation. It is the first ‘medium’-class mission implemented in the Cosmic Vision 2015-25 programme, the current planning cycle for ESA’s space science missions.