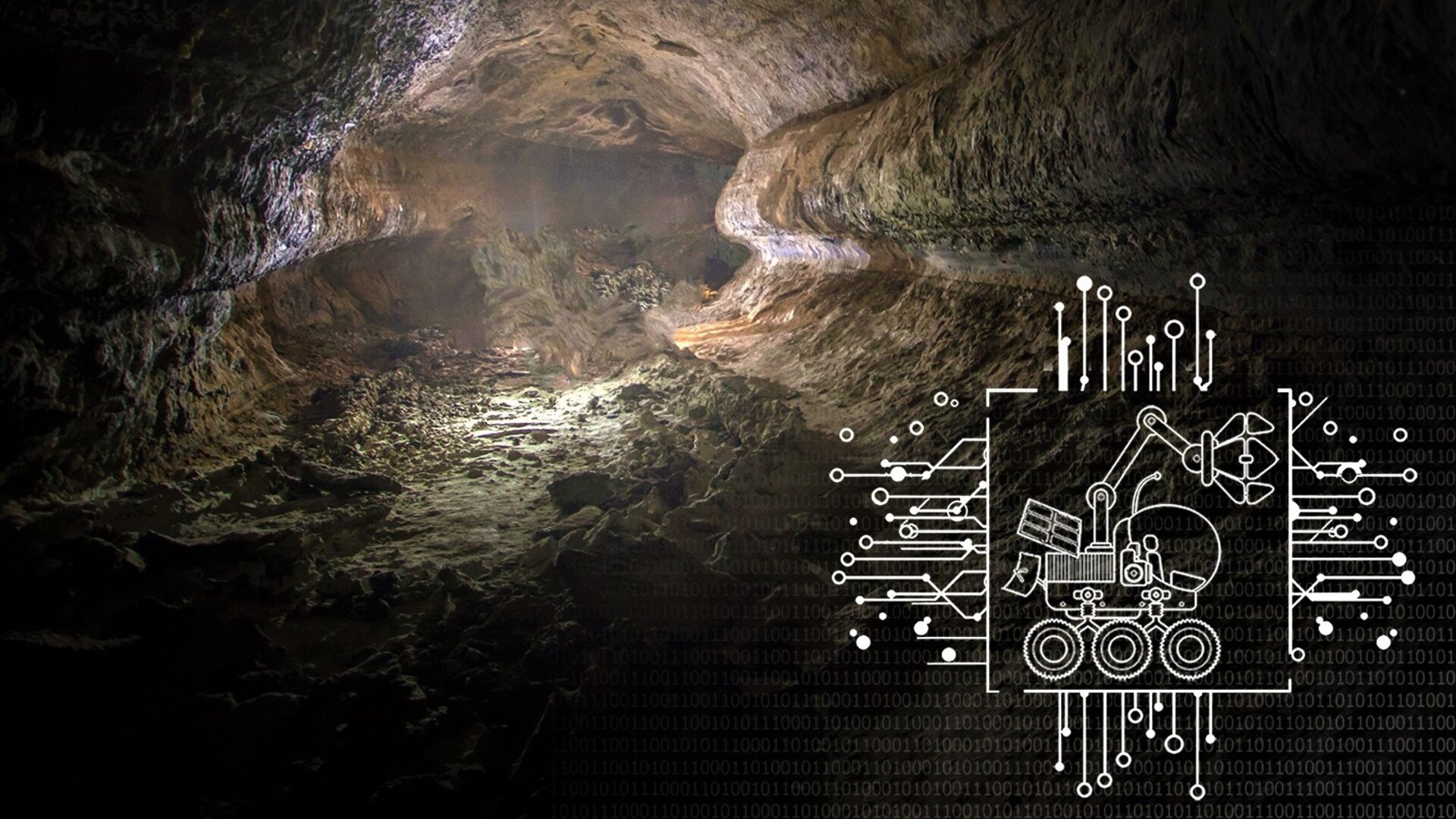 Last year, we asked for your ideas to detect, map and probe caves on the Moon. We selected five of these ideas for further investigation; together they will help us map the direction we should take to develop a mission to explore lunar caves.

The Moon's surface is covered by millions of craters, but it also hosts hundreds of very steep-walled holes known as pits. Like doorways to the underworld, photos of some pits clearly show a cavern beneath the Moon's surface, suggesting that they are 'skylights' into extensive lava tubes that can be as wide as New York's Central Park, and could extend for hundreds of kilometres. These tubes are thought to have formed during lava flows billions of years ago, when the Moon was still geologically active.

Whilst the Moon's barren surface has been well-documented by orbital spacecraft, subsurface cavities remain a mystery but could be vital in our future exploration of the Moon. Not only could they provide shelter for human visitors – shielding astronauts from radiation and micrometeorites, they may also provide access to icy water and other resources trapped underground.

Even so, we need more information about lunar caves before we can set up camp there. This information will be provided by future human and robotic exploration missions, and the five selected studies are an early step towards achieving such a mission. Beyond the ability to access and navigate lunar caves, the mission would need a communication line between the outside world and the inside of the cave, a system to power the rovers inside a cave, and instruments that make useful measurements of the cave environment.

"We've developed a suggested baseline scenario for a lunar cave mission, which would include three key stages," explains Francesco Sauro, a planetary geologist and speleologist who is an expert on lunar lava tubes and technical course director of ESA's CAVES and PANGAEA training programmes.

"The first stage would be to scout out the rim of a pit leading to an underground cave and find a safe place to access it. Then a probe would be deployed into the pit, making measurements of the pit walls as it descends. Finally, the probe would explore the pit floor, find a way to access the lava tube and perform science experiments within the cave to find out more."

The five SysNova studies – proposed as ideas via ESA's Open Space Innovation Platform – address different phases of this mission scenario. They are being led respectively by the German Research Center for Artificial Intelligence (DFKI), Canadian Aerospace corporation Canadensys, the University of Manchester, the University of Oviedo and the University of Würzburg. Details about each study can be found at the end of this article.

Canadensys is investigating a rover that would scout and map lava tubes from the Moon's surface by measuring the gravitational field around pits. Once a pit leading to a lava tube is found, the mission could use a rover like that proposed by the University of Manchester that – rather than using wheels to move around as traditional rovers do – would instead hop around complex terrain to avoid getting stuck or falling over. Such a rover could be used to explore and image the rim of a pit, to find the safest entry point.

At this point, the rover could deploy a probe inside the pit. The team from the University of Oviedo is investigating a rover equipped with a crane to lower the probe into the pit avoiding the risk of unstable rims. DFKI, on the other hand, is investigating using a tether to deploy the probe. Both the crane and the tether would then provide a communication link and power to the probe via the surface rover.

DFKI's proposed tether ends in a probe – taking the form of a semi-autonomous rover – that could explore a cave leading away from the pit. The University of Würzburg team also proposes using a tether and probe system, with the probe being a sphere that would explore and characterise the entrance, the walls and initial part of lunar lava tubes. Both probes would carry cameras and a science payload, as well as the important ability to navigate and map the pits and tubes. The University of Manchester's small, agile hopping rovers would also create maps by working together in a network.

"We are really excited to see how these studies pan out, and to discover how they will contribute to our planning of a mission to explore lunar caves," concludes Loredana Bessone, Technical Officer for the studies and Project Manager for ESA CAVES and PANGAEA. "It's fantastic to work with academia, research institutes and industry to achieve this ambition. They bring their perspective and insight into this complex and forward-thinking project; we will try to integrate their developments into a feasible mission concept through a study that will start early next year in ESA's Concurrent Design Facility, and who knows, we may test some of these technologies in one of the next PANGAEA-X test campaigns."