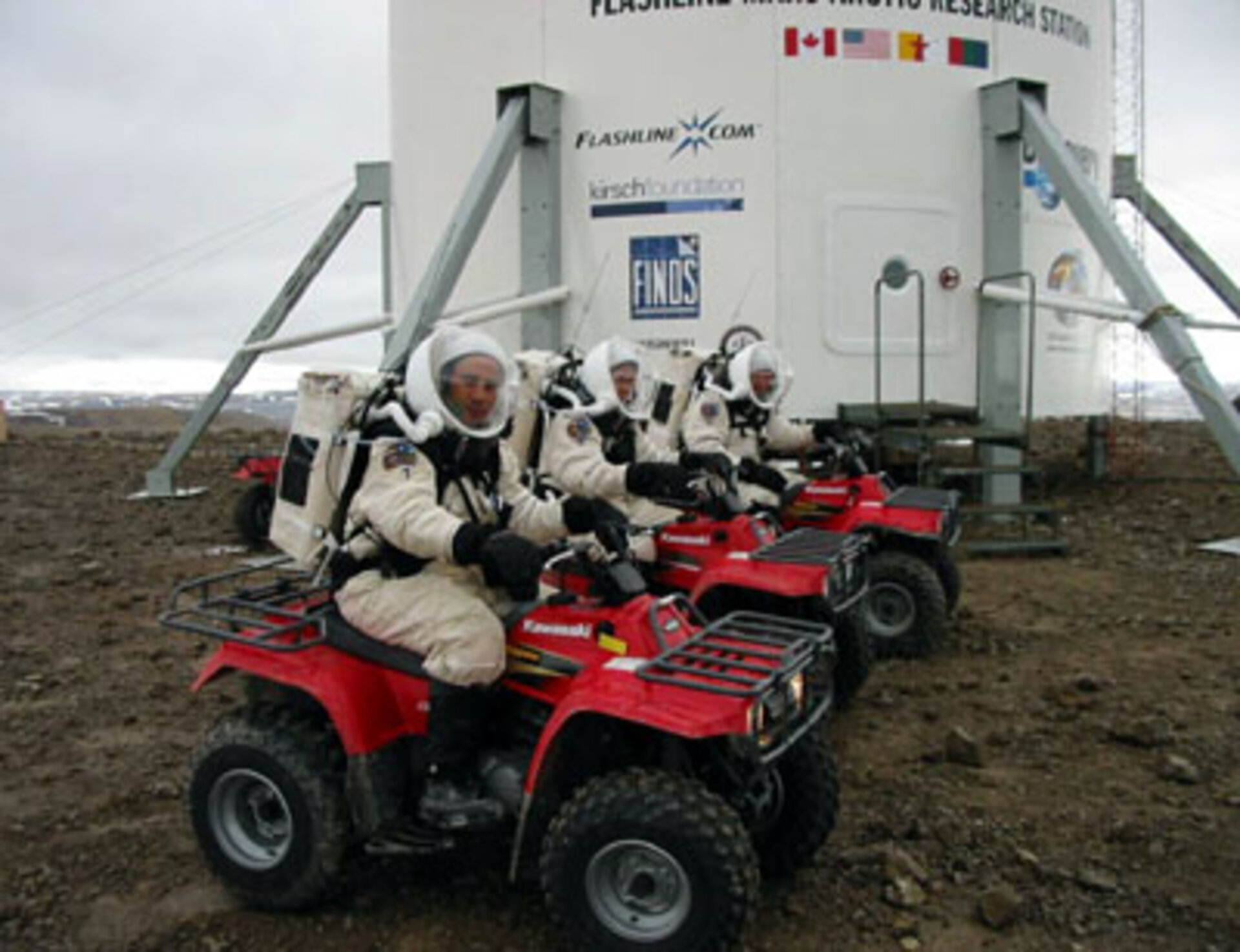 When most people go on vacation, they want to forget all about their jobs. But ESA physicist-engineer Vladimir Pletser, who develops ISS payloads and organizes zero-gravity parabolic flights for the agency, is taking the ultimate working holiday. This week, he's on Mars.

It's not exactly Mars, of course. Manned missions to the Sun's fourth planet - currently the brightest object in Europe's evening skies - will have to wait a while yet. Instead, Pletser is heading for the Arctic, where throughout the summer crews of scientists will spend 10-day stints in a cramped habitat that closely simulates a Mars lander.

The habitat - built by the Mars Society with privately raised funds - is on Devon Island, situated at latitude 75 degrees North in Canada's Nunavut Territory. The chilly terrain, snow-free in summer, is about as close an analogue to the Martian surface as exists on Earth. Obviously, there is no way to mimic the Martian surface gravity of just 0.38 g or the planet's thin, unbreathable carbon dioxide atmosphere. But the dry, cold, rocky desert that is Devon Island meets most other criteria.

The place is big, too: at 66 800 sq km (almost exactly twice the size of Belgium) it is the world's largest uninhabited island. Devon Island also contains the Haughton impact crater, a 20-km scar on the landscape gouged out by a giant meteorite some 23 million years ago, which closely resembles similar craters on Mars.

During their simulated visit to Mars, the men and women in each six-member crew will have to live and work together in a space not much bigger than a camper van. There will be daily EVAs (Extra-Vehicular Activities), for which the scientists will have to struggle into 'spacesuits' and exit their temporary home through an airlock. To add more Martian realism, communications with 'mission control' will be subject to a 20-minute delay that matches the lightspeed lag that any real Mars expedition would have to contend with. As for links to home, the explorers can hope to send an email every 24 hours or so.

"The first goal is to test the feasibility of a Mars mission with existing technology," says Pletser. "But we want to do some science, too." He will be performing an important geophysics experiment himself: an attempt to detect subsurface water by means of seismic waves. Encumbered in an EVA suit with limited visibility, he won't find the work easy. But it is exactly the sort of task that will face future Martian explorers.

Compared with future Mars astronauts, the Devon Island explorers will have things easy. They will be isolated for ten days, not two years or more, and emergency help will be a good deal closer than 40 million miles away. But their experience will be an important addition to the store of knowledge that will make a Mars mission possible. Plus, the Devon Island teams have to face a very special threat that will not trouble real Martian explorers: polar bears. To compensate though, Pletser and his colleagues will have a unique support system. As they struggle sweating through their EVAs, an Inuit hunter will be watching their backs.

Vladimir Pletser is keeping a diary of his mission. Each day the latest diary update is posted on this web site so keep checking to see what life on 'Mars' is like.